Our substance abuse programs are built for all members of the human family. Whether you are LGBTQ+ or straight it doesn’t matter to us. All that matters is you. We are here to help you overcome substance abuse. We at White Tree Medical feel the need to make this clear to the public for one reason.

Yes, awareness. We want all people to know that we are an LGBTQ+ friendly clinic. We want this known because of the recent statistical release from the NIH (National Institute of Health). The NIH has released a notice that the rates of substance abuse in LGBTQ+ communities are much higher than the general population. And many LGBTQ+ people are not getting the help they need. They also don’t know where to go, what places will accept them, or how to even start the recovery process.

Hence, our article today is to raise awareness. We will give you the current situation in the LGBTQ+ community, what steps can be taken, and what resources are available.

“The LGBTQ community is prone to substance abuse at a disproportionate rate compared to that of the general population. This is due in part to a number of societally imposed obstacles that they face, often on a daily basis, that those who identify as heterosexual typically don’t.”

The rate of substance use disorder (SUD) is high in the U.S. According to the NIH 17.1% of the U.S. straight adult population has used illicit substances the past year (over 24 million people). For the LGBTQ+ community that number nearly doubled. The LGBTQ+ community reported 34% have used an illicit substance. The rate at which LGBTQ+ people are abusing substances increases every year.

Another report by the NIH has shown that LGBTQ+ people are more susceptible to substance abuse comorbidities. These comorbidities include the following:

With an increased risk of mental illness in LGBTQ+ people, it is more likely they will develop a substance addiction. It is vital that treatment programs address these mental illnesses when treating LGBTQ+ people. It is reported that only 7.4% of available treatment centers provide LGBTQ+ treatments. These treatments need to include mental health help in order to properly help combat addiction. Many LGBTQ+ people not only suffer from mental illness but social issues as well. Offering help with homophobia/transphobia, family factors, and social isolation are key.

The daily stressors of an LGBTQ+ person usually differ from a heterosexual person. According to addictioncenter.com Many LGBTQ+ people are susceptible to the following occurrences:

It is very important that addiction treatment centers provide LGBTQ+ friendly services. Until that happens, the rate as to which drug abuse occurs will continue to rise. We at White Tree Medical make it a priority to fight drug addiction. In fact, we have joined other treatment centers in the 7.4% that open their doors to the LGBTQ+ community.

How can the LGBTQ+ addiction rate decline? 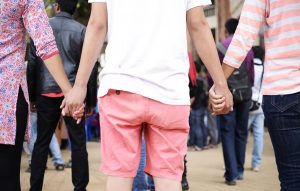 “Never be bullied into silence. Never allow yourself to be made a victim. Accept no one’s definition of your life; define yourself.“–Harvey Fierstein

Aside from the efforts against drug abuse in the U.S., there needs to be awareness of the LGBTQ+ community. Many programs do not open their doors to LGBTQ+ because of difference. At White Tree Medical we hold to the social responsibility of helping all people who struggle with substance abuse. We all must take part in raising awareness of the difference in substance abuse rates between heterosexual and LBGTQ+ people.

Remember that life after addiction is wonderful.

Life after addiction is a gift. Many people who have experience addiction claim that life is extraordinarily better after quitting. Although the journey may be hard, it is worth it. You are worth it. Every life is worth living. And being healthy and free makes it so much better. Here is a list of what changes occur after addiction:

All people deserve to live a happy and full life. Especially, people who don’t believe they do. It is time we raise awareness and make treatment programs available to all members of our human family.

We hope this information has helped you. Whether you are LGBTQ+ or heterosexual the information is for all. By reading this you have become more aware. Help to increase this awareness. Share this blog and invite others to read it.

Have a great day!